This is a tough update.  We’ve decided to take a break from the trail.  Everything was going so well and this is beyond disappointing.

I mentioned on previous posts that I had to go home a couple of weeks ago.  I thought it would be for routine tests but the tests came back with concerning results.  I asked the doctor if I could wait to address it until after Paul finished Maine.  She advised against it.  So I am flying home today for more testing.
I arranged with my sisters to help me out until Paul could finish Maine and take a break for awhile.  It was going to be tricky, but other hikers get their supplies shipped to them.  But right before the 4th of July Paul reinjured his hernia.  He fell while hiking.  He grabbed a tree to keep him from falling into a ditch.  The pressure from that abrupt stop caused him to tear his hernia some more, we suspect.  The pain got worse and it is a warning sign that something more serious could happen.
We made the heartbreaking decision to take a break from the hike and both of us go home to take care of us.  It is amazing that Paul made it an additional 300+ miles after his initial injury.  He will get it surgically repaired and come back stronger. I just feel like he has been doing the hiking version of the Indy 500 and we hit the wall after 100 laps.  There is nothing you can do except try again next year.  I remember one of the drivers saying that it’s not enough to be the fastest, best equipped car out there.  You have to have be lucky too.  Luck didn’t go our way.
In a way I am a tiny bit relieved that Paul decided to pause when he did.  You have to be working 100%, mentally and physically,to tackle the White Mountains of New Hampshire.  How can he be when he is injured and worrying about his wife 3000 miles away.
Over the last week there has been a little bird that has built a nest on the tire of our SUV.  Every day we would have to move it.  The next day she had built another one.  She did this at least 4 times until we finally left.  I’m sure that little bird is frustrated and angry and shaking it’s wing at this injustice.  When in reality I was trying to protect her.  I feel like we are like that bird.  We tried and tried to make this work, but a higher power is protecting us and telling us to move on.
We’ll be in touch shortly.  I’ll continue to post periodically because I have tons of tales.  For now we are too heartbroken to say much more.  Except — we’ll be back. 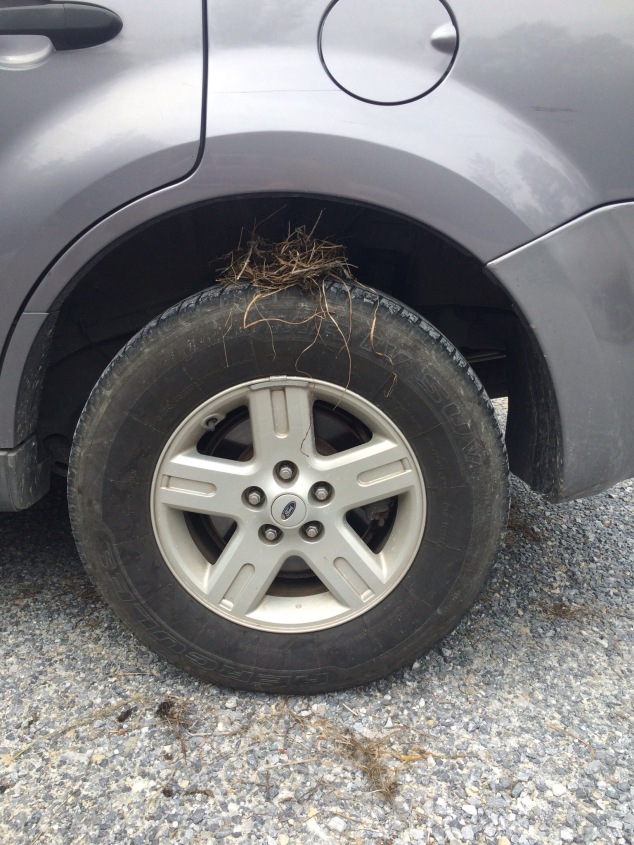