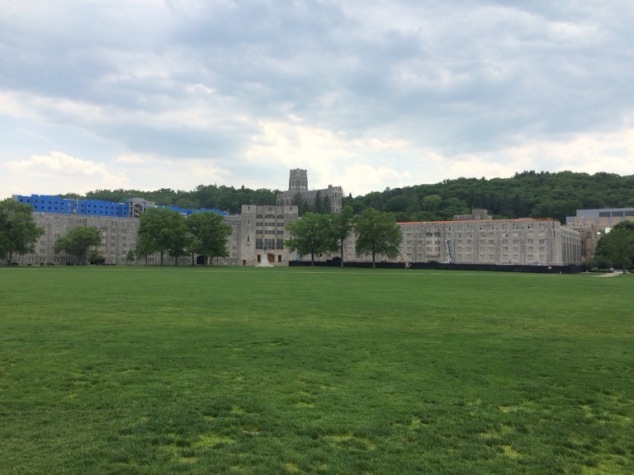 During the waiting period for Paul’s tests I got a travel companion.   As the AT travels through the Hudson River Valley it passes within a few miles of West Point.  As an Army guy,  I thought that Paul might be interested in seeing a part of his heritage.  I was positively giddy because I love visiting historical sites, particularly if they are scenic.  At the very least I thought it would be a good distraction for Paul.

We got there the week after graduation.  It was one of the few occasions where there are no cadets on campus.  Unlike other colleges or universities, the cadets don’t get the Summer off.  That’s when they go for more advanced Army training.  Whether it is Air Assault school or tactical schools, they are still learning.  Paul remembers having cadets come through Basic Training when he was a Drill Sergeant.

If you are in the area I highly recommend taking the guided tour.  There is so much history here.  George Washington selected the site.  It was the plans to Westpoint that Benedict Arnold was selling to the British.  They caught his accomplice in a boat on the Hudson.  Most of the high ranking officers on both sides of the Civil War went here or taught here.  Both Robert E Lee and Stonewall Jackson are still highly regarded here.  My favorite story was about Patton.  It took him 5 years to graduate, which would not be allowed now.  (He had dyslexia).  He said it took him so long because he couldn’t find the library.  So now his statue is prominently placed in front of the library.  There is so much tradition here.  I would LOVE to go to a football game here.  It would be nice if they would win one too.

I love this picture of Paul.  We are in the chapel and the guide was telling us about the candle lighted behind Paul.  It sits in the middle of the pews.  It represents the POW/MIAs.  And it is always lit.  It was a particularly emotional moment for all the Veterans on the tour.
I learned on the tour that the Army mascot is the mule.  I think that is so appropriate.  Paul definitely shares the attributes assigned to the mule:  stubborn, hard working, clever, tireless….  And those traits will continue to serve him well on the trail.