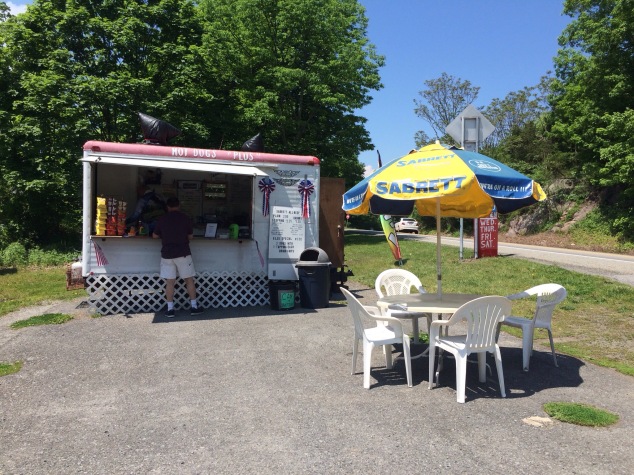 The ubiquitous New York hot dog stand.  “The Best Dam Hot Dog” stand is a seasonal landmark near Greenwood Lake, NY.   It is a sight for sore eyes when you pop out of the woods and find this guy on the side of the road by the trailhead.
After getting the doctors’ approval, Paul hit the trail again the Saturday of Memorial Day weekend.  It was unseasonably hot and humid.  We didn’t care.  We were both excited to get back out there.  Plus it was nice to see some blue skies again.

I dropped Paul at the trailhead by this hot dog stand.  He was excited to get started.  He promised to take it easy and would call me if he needed anything.
I noticed a hiker headed down the hill into the town of Greenwood Lake.  I asked her if she would like a ride.  She hopped in and asked if we could pick up another hiker she met at the shelter who was also headed into town.  KT wanted to go to a farm stand.  She was on a mission to get some watermelon.  Based on my own experiences with the farm stands, I was afraid she was going to be disappointed.  But why not try.  She is from New Hampshire and like everyone I’ve met from the Granite State, she is proud of it’s beauty and ruggedness.  Let’s find this hungry hiker some juicy fruit.

Halfway down the hill we picked up the appropriately named, Quick.  He’s from Alexandria, VA.  He started at Springer Mountain.  Even with taking some time off to attend to an injury he is still one of the earliest thru hikers we’ve met who started in Georgia in March.  He is Quick!
Greenwood Lake is a community accustomed to hikers.  When I dropped Quick off at a hiker friendly coffeehouse a lady pulled up to us.  She asked Quick if he was hiking the AT.  When he said yes, she handed him a ten dollar bill and said “I always buy the hikers lunch”. Then she drove off.   I was amazed.  Quick thanked her and promptly gave KT, whom the driver had not seen, half of the money.  Wow.  We said good bye to Quick and went to find the farm stand.
As I suspected there was no watermelon.  Even the strawberries were imported from California.  The rains this season went on for so long that the crops are late.  About the only local fruit available was an apple.  I will always remember the look on KTs face as she bit into the apple.  It was a look of disappointment but knowing that you had to be satisfied with what you got.  I imagine the hikers have learned to live with that emotion a lot.  Another life metaphor from the trail.
I thought I would surprise Paul with a treat.  I knew his spirits needed some lifting.  Plus it was stinking hot and humid.  So I booked us a room for a couple of nights at a hotel.  We’ve not stayed in a hotel since we hit the trail.  He could watch the Indianapolis 500 in air conditioned comfort.  I could take a bubble bath.  It was a win win.
When I spoke to Paul later in the day he told me that he met another hiker who retired from the military the same year he did. They hiked together for a couple of hours before Paul told him to go on while he took a break.  Rain is hiking while his wife, Sprinkle, is following along with their Airstream.  She was parked at the trailhead we were going to.
I knew Paul was whooped so we agreed to pick him up one trail crossing early.  I went back to the hot dog stand and bought a bunch of dogs.  I wanted to meet Rain and Sprinkle so we went to the trailhead where they were meeting.  We passed Rain as he was coming into the final stretch.  Paul hopped out of the car and greeted Rain with a hot dog and a cold coke.
We met Sprinkle and they had a surprise for me: 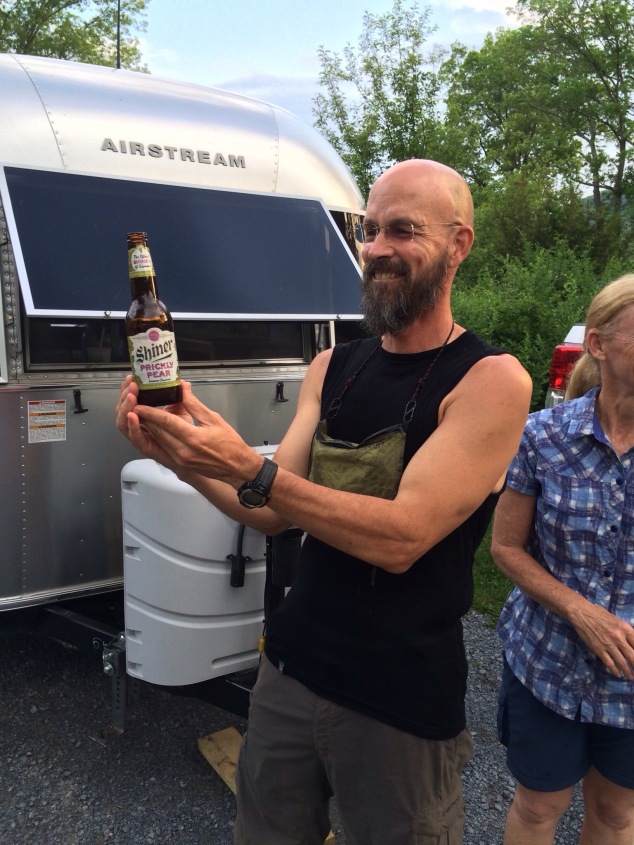 Trail magic for me!  Texans know the significance of Shiner beer.  I asked where in the world they found Shiner in New York.  They found it in a little store in Vernon, New Jersey.
We stayed and talked at the trail head for awhile.  We had an ice chest full of soda and water.  Not too much later we saw Quick again.  In spite of taking the side trip into town he still managed to cover huge miles that day.
We finally left when a family from Harlem came out of the woods and they were completely lost.  They had wandered seven miles away from their car.  We gave them the rest of our water and gave the dad a ride back to his car.  The kids stayed with Rain and Sprinkle until he could get back.

Paul was thrilled with the hotel idea.   He can rest up before tackling the next challenge:  The Lemon Squeezer.
More on Rain and Sprinkle on the next post.  It felt really good to be back on the trail.

2 thoughts on “Back on the trail”