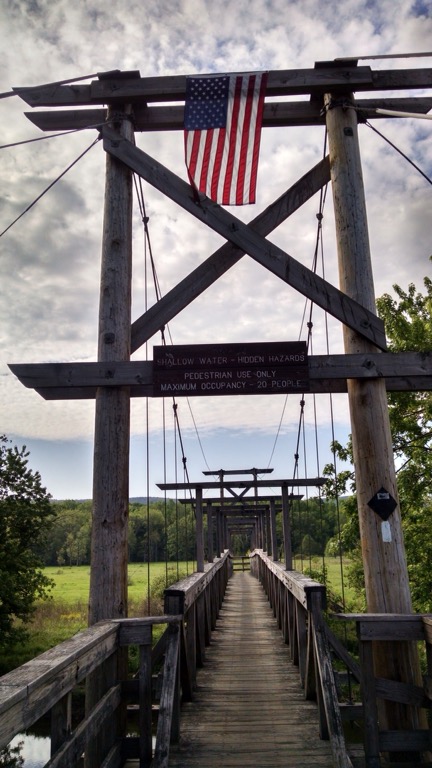 Paul made some more milestones.  Yesterday he went over the 500 mile point.  He’ll start tomorrow with 509 miles under his belt.  It was his 50th day on the trail.  And he finished New Jersey!

New Jersey was a bit of a surprise.  I never knew how wild it could be.  Paul was told repeatedly that New Jersey had the most black bears per square mile of anywhere on the AT.  There were signs on all of the shelters warning of high bear and rattlesnake activity.  That gave me nightmares.  Aside from the bears we saw in Shenandoah, we’ve only seen one other bear.  That guy was in Pennsylvania and he was huge.  Luckily we were in the car driving back to our campsite.  I’m sure Paul was not too anxious to get back on the trail after that.  But he did it.

New Jersey is known for its boardwalks.  Not just the one in Atlantic City either.  That first picture is of a fancy entrance to a boardwalk.  The AT criss crosses several swamps and boggy areas.  Some of the boardwalks are fairly primitive.  He made good time on those.  There were still a bunch of rock scrambles that slowed him down, but nothing like Pennsylvania.

The obelisk is in High Point State Park.  It had amazing views.  The best views in New Jersey were in Waywayanda State Park at the top of the Stairway to Heaven.

I left Paul on his own for a few days when I went to Texas to attend my nephew’s graduation ceremony.  He was in good hands. He met Bob who is a retired teacher.  Bob now runs a shuttle for AT hikers.  He also maintains a 14 mile portion of the trail by High Point State Park.  His section is meticulously maintained and well marked.  For any hikers from Delaware Gap to the Hudson River, Bob’s your guy.