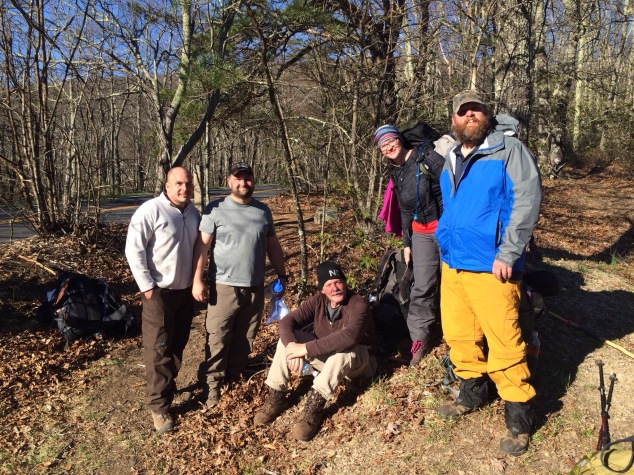 Long distance hikers spend a lot of time alone.  For many, that is the primary reason for spending months in the woods.  But when you run across another hiker who has experienced that same hill that just kicked your butt, you develop a camaraderie.  The AT can be a very social experience.
Part of the culture of the AT (and other long trails) is the hikers go by trail names.  Some people name themselves.  I think most people acquire their name along the way.  Some names are straight forward and others have a unique story.

The guy in yellow is “Uke”.  He did the trail 2 years ago.  He always carries a ukulele with him on his hikes.  His original one is hanging in a bar in Stafford, VA where it is patched up with duct tape and unplayable.  He had one in his pack there.

Paul’s trail name is Mr. Nature.  It was a moniker given to him many years ago by my cousins.  Paul had just retired from the Army when we drove to Wyoming for my brother’s wedding.  We had Paul’s son Joshua with us who was 12 at the time.  In the days before the wedding we would take Josh and my cousins’ kids hiking.  They were like his little troops.  They hiked and played hours long games of hide and seek in the woods.  Since Paul wasn’t Uncle Paul yet, they dubbed him Mr. Nature.  He was kind of a Pied Piper with the kids.  The kids are approaching 30 years old now and they still call him Mr. Nature.  People on the trail smile when he introduces himself.

Trail Magic is that surprise along the trail that keeps you going.  In some cases it is the very  thing that saves your hike.  We met the guys above when I met Paul at the end of the day. They were in a bit of a quandary.  Their hike was taking much longer than they expected.  They had planned to make it to a campsite another 3 miles away, but they didn’t have enough water for everyone.   They appeared as I was picking Paul up.  We have a cooler in the back with water and sodas.  Plus I had a big box of snacks.  So we were able to replenish their stocks.  We also had a big bag of Easter candy in the back, courtesy of our friend Colleen.  We spent Easter with Colleen, Erik & Charlie Smith in Bentonville, Arkansas on our way out.  Colleen loaded us with approximately 2 lbs of Easter candy.  Each.  Luckily for the hikers we had some leftover.  Paul was happily sharing the candy and they dubbed him the Easter Bunny.  But since he already had a trail name and I’m the one who appeared unexpectedly with the treats, Easter Bunny is now my trail name.

Since then Paul has performed many acts of Trail Magic.  From pumping extra water for unprepared hikers to patching up the paw of a not so friendly dog.  Most of the time these are the weekend warriors who weren’t prepared.  Most of the AT hikers know their stuff.

We’ll have more tales from the trail soon.